The beautiful capital of the state of Sikkim, Gangtok is the most important city in Sikkim. The capital city is located in the eastern Himalayan range, at an altitude of 1,650 m. Located within higher peaks of the Himalaya, the city enjoys a year-round mild temperate climate. 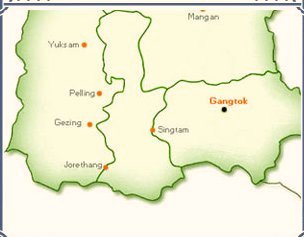 Gangtok is situated in the lower Himalayas at an altitude of 5,410 ft between 27.3325°N 88.6140°E. The city is flanked on the east and west by two streams viz, Roro Chu and Ranikhola. Gangtok is situated in the lower Himalayas and the hills are nestled within higher peaks. Most of the roads here are steep. Mount Kanchenjunga, world's third-highest peak, is visible to the west of the city. Gangtok has large forest cover and the forested regions around Gangtok consist of temperate, deciduous forests of birch, poplar, oak and elm and also evergreen, coniferous trees of the wet alpine zone. Orchids and bamboos are abundant in Gangtok. In the lower reaches of the town the vegetation gradually changes from alpine to temperate deciduous and subtropical. Different flowers such as sunflower, poinsettia, marigold and others bloom here.


Weather and Climate in Gangtok 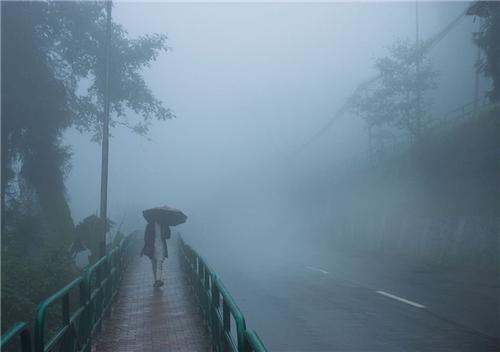 The capital city Gangtok is characterised by subtropical highland monsoon driven climate. The whole city experiences a mild, temperate climate all year round. During summer temperatures ranges from an average maximum of 22 °C to an average minimum of 4 °C in winter. Summers in the beautiful city starts from late April and lasts till June. During summer the weather is mild, with maximum temperatures rarely touching 25 °C. The monsoon season starts from June and lasts till September and is characterised by intense torrential rains. In winter temperature averages between 4 °C and 7 °C. During the winter months Gangtok is often enveloped in fog.